Amazon's Jeff Besos - The Richest Person In The World 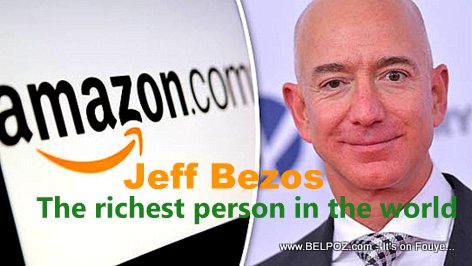 Want to know who is the richest man in the world in 2018? His name is Jeff Besos and he's gonna by the Richest man for a while... There's a big gap!

Since July 2017, Amazon founder Jeff Bezos (Jeffrey Preston Bezos) surpassed Bill Gates who has a network of 95.7 billion USD and became not only the world's richest man, but the richest person in the world with an estimated net worth of 164.7 billion USD as of the writing of this article.

According to Forbes's 2018 Billionaires List, Jeff Besos was worth 112 billion USD. That's before Amazon became a Trillion dollar company.

Hi Jeff. I worked for your company back in 2016. I had my car repossessed, so I couldn't continue to work at Amazon STL 4 in Edwardsville, Illinois.

I recently put an application in.

I would really appreciate it if your Staff would give me a second chance.

Name (required) E-mail (required, will not be published)
Subject: Amazon's Jeff Besos - The Richest Person In The World edit